What an incredible day for skiing today!  I had to post a picture of our three skiers enjoying the snow and sunshine at Pilot Knob State Park today. 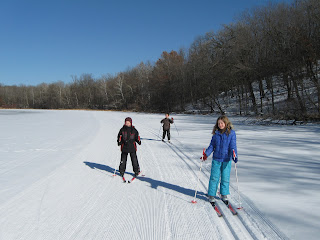 The lake at Pilot Knob State Park was regroomed this morning.  The skating lane looks to be in good shape all around the lake with the exception of a few hard icy spots.  Classical tracks were set on the South side of the lake only. 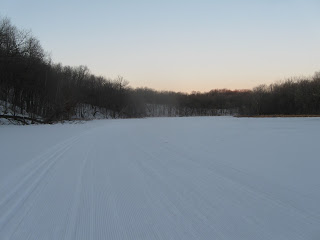 Posted by Jeff Hovinga at 8:42 AM No comments:

I just went for a night ski and enjoyed some nice skating on the Pilot Knob lake.  There is still enough snow to work with all the way around the lake thanks to the 2" of snow on Monday.  Due to a week of thaw/freeze cycles the snow was pretty hard.  My plan is to get out early this Saturday morning and regroom the skating lanes.  It should make for some pretty good skating on Saturday morning and early afternoon.  I will attempt to set some tracks for classical skiing on the protected side where the deeper snow is, but it might not work to well.  I'll let you know!
Posted by Jeff Hovinga at 9:14 PM No comments:

The lake was groomed for skating only tonight thanks to a good 2" of fresh snow today.
Posted by Jeff Hovinga at 9:38 PM No comments:

The skate trail around the perimeter of Pilot Knob Lake was regroomed Saturday night.  It should make for some good skating on Sunday.  And hopefully we'll get some snow on Monday!
Posted by Jeff Hovinga at 10:25 PM No comments:

The lake at Pilot Knob State Park was regroomed today.  The skating portion was redone and is in surprisingly good shape.   The classical tracks were not redone because of lack of new snow and therefore are rather hard and slick.  I went out and enjoyed some of the best skating of the year! 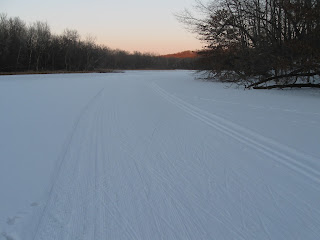 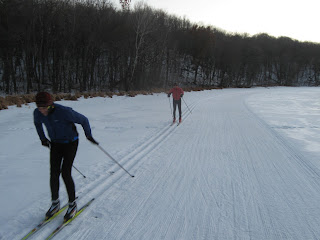 There isn't enough snow left on the city ski trail to regroom or even to enjoy skiing thanks to last week's warm temperatures.  So I always enjoy skiing on the ice on the lake at Pilot Knob State Park.  The snow will last a lot longer on the ice and because of the the hills and trees that surround the lake.

Eric and I were out there last night touching up the skating portion of the loop.  The classical tracks are a week old but we decided to let those remain.  According to the snowmobile the loop is 1.5km long.  And it is one of the prettiest most wind protected places you'll find to ski in North Iowa.  It's only missing hills to ski on!

It can be accessed from the sledding hill parking lot.  Just head South on the other side of the small pond next to the warming shed.

After Monday's melt down, we'll try to get out there again to regroom.  Enjoy! 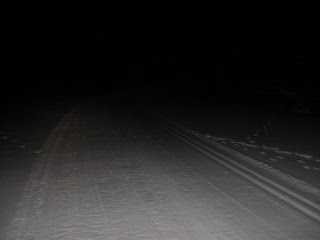 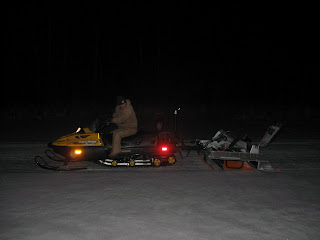